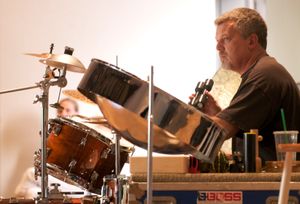 Ray McNamara grew up in the Chicago area as one of six children.  He studied Percussion Performance at Northern Illinois University where he received his Bachelor’s degree in Music and then went west to pursue further study at California Institute of the Arts where he received his MFA in World Music and Contemporary Percussion.  Ray most recently performed with the LA Philharmonic under the baton of Gustavo Dudamel.

Ray’s film, television and theatre credits are extensive and include: the Grammy nominated score for Pixar’s, A Bug’s Life with Randy Newman. The Devil’s Rejects by Rob Zombie and Indian Runner directed by Sean Penn to name a few.  Ray’s television credits include: The Rosanne Show, ESPN and Fox Sports.  Ray has played on various stages including the Actors Gang production of "A Midsummer Night's Dream", directed by Tim Robbins, Circle Theatre’s production of "Pippin", Jacaranda’s Music at the Edge and the Colburn Tap Festival.

Ray can also be heard on recordings from Rob Zombie, Daniel Lentz, Harold Budd, John Ehlis, Zadonu African Group, The Calypso Pirates, Big Bamboo, Lowen and Navarro, Damaru, Susannah Blinkoff as well as his own solo projects which blend his unique style of soca and jazz on the Steel Pan.